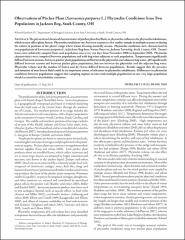 The physical and chemical characteristics of pitcher plant leaf fluid, or phytotelm, influence the phytotelm inhabitants, which in turn affect plant fitness. Phytotelm conditions vary between seasons yet few studies sample in multiple seasons or during the winter in portions of the plant’s range where winter freezing normally occurs. Phytotelm conditions were characterized in two populations of Sarracenia purpurea L. in Jackson Bog State Nature Preserve, Jackson Township, Stark County, OH. Twenty leaves were arbitrarily sampled from each population once every ten days from November 2008 to September 2009. Phytotelm characteristics were compared between populations and with bog water adjacent to each population. Temperatures significantly differed between seasons, between pitcher plant populations and between the phytotelm and adjacent bog water. pH significantly differed between seasons and between pitcher plant populations, but not between the phytotelm and the adjacent bog water. Phytotelm volume and the number of frozen and dry leaves differed between populations. Results suggest that the presence and duration of non-frozen fluid could be an important source of selection on phytotelm inhabitants. Differences in phytotelm conditions between populations suggest that sampling regimes in sites with multiple populations or one very large population should account for microhabitat variations.