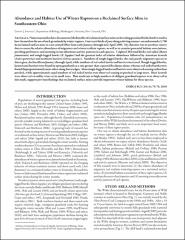 Numerous studies have documented the benefits of reclaimed surface mines to breeding grassland birds, but few studies have focused on the use of such grasslands by winter raptors. I surveyed birds of prey along a driving transect on and around a 3,700 ha reclaimed surface mine in east-central Ohio from early January through mid-April 2009. My objective was to use these survey data to assess the relative abundance of migratory and winter resident raptors, as well as to examine potential habitat associations, perching preferences and morning versus afternoon activity patterns in each species. I sighted 382 total birds; red-tailed (Buteo jamaicensis) and rough-legged hawks (B. lagopus) had the greatest index of relative abundance followed by American kestrels (Falco sparverius) and northern harriers (Circus cyaneus). Numbers of rough-legged hawks, the only purely migratory species in this region, declined from January through April, while numbers of red-tailed hawks and harriers increased. Rough-legged hawks, kestrels and harriers were found in open grasslands at a rate greater than expected by chance alone, whereas red-tailed hawks were found disproportionately more often along forest edges. Most rough-legged hawks and harriers were observed soaring rather than perched, while approximately equal numbers of red-tailed hawks were observed soaring or perched in large trees. Most kestrels were observed on utility wires or in small trees. That moderate to high numbers of obligate grassland raptors were observed in this study, support previous findings that reclaimed surface mines provide important winter habitat for these species.