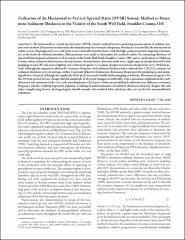 The horizontal-to-vertical spectral ratio (HVSR) seismic method involves analyzing measurements of ambient seismic noise in three dimensions to determine the fundamental site resonance frequency. Resonance is excited by the interaction of surface waves (Rayleigh and Love) and body waves (vertically incident shear) with the high-contrast acoustic impedance boundary at the bedrock-sediment interface. Measurements were made to determine the method’s utility for estimating thickness of unconsolidated glacial sediments at 18 locations at the South Well Field, Franklin County, OH, and at six locations in Pickaway County where sediment thickness was already known. Measurements also were made near a high-capacity production well (with pumping on and off ) and near a highway and a limestone quarry to examine changes in resonance frequencies over a 20-hour period. Although the regression relation for resonance frequency and sediment thickness had a relatively low r2 (0.322), estimates of sediment thickness were, on average, within 14 percent of known thicknesses. Resonance frequencies for pumping on and pumping off were identical, although the amplitude of the peak was nearly double under pumping conditions. Resonance frequency for the 20-hour period did not change, but the amplitude of the peak changed considerably, with a maximum amplitude in the early afternoon and minimum in the very early morning hours. Clay layers within unconsolidated sediments may influence resonance frequency and the resulting regression equation, resulting in underestimation of sediment thickness; however, despite this and other complicating factors, hydrogeologists should consider this method when thickness data are needed for unconsolidated sediments.