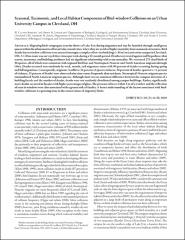 Migrating birds congregate near the shores of Lake Erie during migration and may be funneled through small green spaces within the urban matrix of Great Lake coastal cities, where they are at risk of higher mortality from manmade structures. Bird deaths due to window collisions were assessed amongst a complex of low-rise buildings (<30 m) on a university campus in Cleveland, OH. A 1.8 km route was surveyed three times per week during a 12-month period. Deaths were tested against null hypotheses that season, taxonomy, and building attributes had no significant relationship with avian mortality. We recovered 271 dead birds of 50 species, all of which were consistent with regional bird lists and Neotropical-Nearctic and North American migrants through Ohio. Deaths occurred non-randomly by week, month, and migratory status with 90 percent of deaths occurring during spring and fall migrations. Consequently, migrants (warblers: 34 percent of species richness, 30 percent of deaths; sparrows: 14 percent of richness, 35 percent of deaths) were observed nine times more frequently than residents. Neotropical-Nearctic migrant species outnumbered North American migrant species. Although there was no statistical difference between the compass direction of a building facade and the number of deaths, deaths were not randomly distributed among campus buildings. Rather, significantly more deaths occurred at facades with higher percentages of glass. The presence of trees within 5 m of a window and the reflection of trees in windows were also associated with a greater risk of fatality. A better understanding of the factors associated with bird-window collisions is a pressing issue in the conservation of migratory birds.