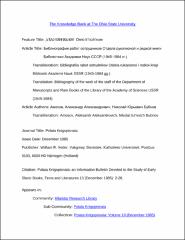 Bibliography
Department of Manuscripts and Rare Books, Library AN SSSR

Dielo k"nizh'noie: Bibliografiia rabot sotrudnikov Otdela rukopisnoi i redkoi knigi Biblioteki Akademii Nauk SSSR (1945-1984 gg.)
About Books: Bibliography of the work of the staff of the Department of Manuscripts and Rare Books of the Library of the Academy of Sciences USSR (1945-1984)

A. A. Amosov and N. IU. Bubnov, staff of the Department of Manuscripts and Rare Books, Library of the Academy of Sciences, SSSR.