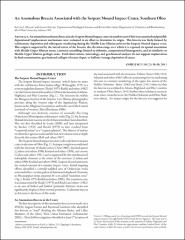 An anomalous carbonate breccia in the Serpent Mound impact crater in southwestern Ohio was examined and possible depositional/emplacement mechanisms were evaluated in an effort to determine its origin. This breccia was likely formed by sedimentary deposition and subsequent weathering during the Middle-Late Silurian prior to the Serpent Mound impact event. This origin is supported by the lateral extent of the breccia, the elevation range over which it is exposed, its spatial association with Middle-Upper Silurian strata, a mineral assemblage limited to dolomite, compositional homogeneity, and its similarity to Middle-Upper Silurian geologic units. Field observations, mineralogy, and geochemical analyses do not support emplacement by fault comminution, gravitational collapse of crater slopes, or ballistic/resurge deposition of ejecta.