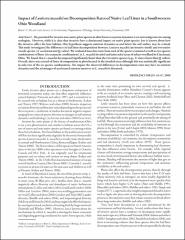 The potential for invasive non-native plant species to alter forest ecosystem dynamics is an increasing concern among ecologists. However, while it is clear that invasives have a detrimental impact on native plant species, less is known about how the invasives affect the host habitat. One hypothesis suggests nutrient dynamics at and below the soil surface may be critical. This study investigated the differences in leaf litter decomposition between Lonicera maackii (an invasive shrub) and two native woody species (A. saccharum and Q. rubra). We evaluated mass loss rates from each of the species examined as well as two-species combinations of litter (six treatment combinations) in L. maackii invaded and uninvaded areas of urban woodland in Cincinnati, Ohio. We found that L. maackii decomposed significantly faster than the two native species (e.g., 21 times faster than Q. rubra). Overall, there was a trend of faster decomposition in plots located in the invaded areas although this was statistically significant in only two of the six species combinations. The impact the observed differences in decomposition rates may have on nutrient dynamics and the advantages of accelerated nutrient turnover to L. maackii is discussed.