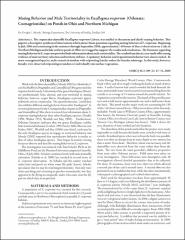 The crepuscular damselfly Enallagma vesperum Calvert, was studied to document and clarify mating behavior. This paper is a descriptive synthesis of observations which answer basic questions regarding mating behavior of E. vesperum. Beginning in July 2004 and continuing in the summers through September 2009, approximately 140 hours of direct observation on a lake in Northern Michigan and a lake and two ponds in Ohio were logged to support the results and conclusions. The literature regarding mating behavior in E. vesperum provides little information about male territoriality. The results from this six-year study offer strong evidence of male territory selection and territory defense. Copulatory behavior and ovipositional behavior were also recorded. In most coenagrionid species, males remain in tandem with ovipositing females unless the females submerge. In this study, however, females were observed ovipositing in tandem or individually into surface vegetation.