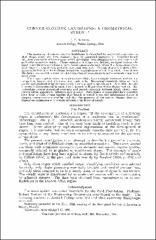 The geometry of convex-concave landslopes is described by empirical equations, so that shape, scale, and form elements may be compared numerically. Gradient-length relations determine intervals over which particular form elements exist, and over which particular equations apply. Three segments of slopes are defined, an upper convex element, a middle straight element, and a lower concave element, where the change in gradient with length is respectively positive, zero, and negative. The use of gradient data allows accurate definition of form elements and the intervals over which they exist. Use of profile data alone results in incorrect determination of form elements and inaccurate numerical description. The slopes studied occur in southwestern Ohio, have straight contours, and are developed on kames, end moraines, and shale hills. Numerical constants obtained from profile and gradient relations accurately describe each slope element. A middle straight element is demonstrated to exist, but is absent in 30 per cent of the slopes studied. Relationships among numerical constants and parent materials indicate highly similar geometric forms, apparently different only in scale. Persistence of equivalent form elements from long to short slopes implies that length of runoff is not the determining factor in shaping convex-concave profiles, and that the presence of the convex element does not depend on dominance of processes of creep over those of runoff.