Paul B. Sears’ Contributions to the Development of Paleoecology 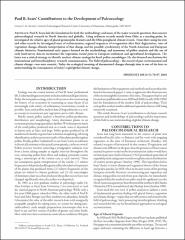 Paul B. Sears laid the foundation for both the methodology and many of the major research questions that concern paleoecological research in North America and globally. Using sediment records mostly from Ohio as a starting point, he investigated the relative ages of glacial geomorphic features and the Ohio postglacial climate record. From there using his own and other records he investigated rates of sedimentation, regional sequences of revegetation after final deglaciation, rates of vegetation change, climatic interpretation of that change and the possible synchroneity of the North American and European climatic histories. Foundational early papers focused on the methodology and taxonomy of pollen analysis and the use of early land-survey data to reconstruct the vegetation record prior to European settlement and agricultural development. The latter was a critical strategy to identify modern climate analogs for fossil pollen assemblages. He also fostered mechanisms for international and interdisciplinary research communication. The field of paleoecology—the record of past environmental and climate change—was once esoteric. Today the ecological meaning of documented changes through time is one of the keys to understanding the consequences of today’s rapid global climate change.