Contributions of Paul B. Sears to Natural Vegetation Mapping in Ohio 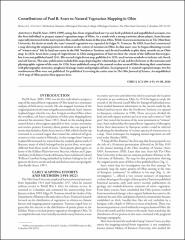 Paul B. Sears (1891-1990), using data from original land surveys and both published and unpublished accounts, was the first individual to prepare natural vegetation maps of Ohio. As a youth with a strong curiosity about plants, Sears became especially interested in the native prairie flora south of his home in Bucyrus, Ohio. While Sears was an instructor at The Ohio State University, his desire to study the state’s natural vegetation was expanded by Edgar N. Transeau. By 1919, Sears had constructed a map showing the original prairies in relation to the system of moraines in Ohio. In that same year, he began obtaining records of “witness trees” left by land surveyors in the Old Northwest Territory and devised symbols to plot those records on an Ohio map. In 1923, Sears drew a map of virgin forests in Ohio using patterns of lines to show the extent of the different forest types, but it was not published until 1941. His second virgin forest map, published in 1925, used various symbols to indicate oak, beech and ash forests. The same publication included his maps depicting the relationships of oak and beech forests to the moraines and physiographic regions of the state. In 1926, Sears published a map of the natural treeless areas of Ohio showing their correlations with physiography, moraines, preglacial drainage routes and postglacial lakes. Sears prepared 11 natural vegetation maps; two for northwestern Ohio were not published. He published 9 covering the entire state in The Ohio Journal of Science. An unpublished 1919 map of Ohio prairies first appears here.