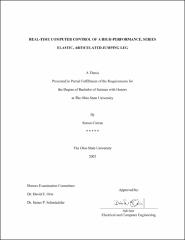 A lightweight, small-scale, prototype mechanical leg was developed with the intent of being used in a quadrupedal machine capable of a planar gallop. In contrast with wheeled vehicles, robotic quadrupeds do not require a clear path. With only discrete foot holds, they could traverse formidable terrain at speeds once thought possible only by biological systems. Nevertheless, dynamic locomotion requires both explosive leg power and computationally intensive real-time computer control. Research has show that size, weight, computer and actuation power are all issues that must be further explored for robotic galloping to be successfully achieved. The leg studied has two axes of control, one at the hip, and the other at the knee. Each axis is a revolute joint with a single degree of freedom and is actuated solely by a DC motor through a cable and pulley transmission. Series elastic actuation is implemented at the knee to control the shank and seeks to mimic the tendons and muscles found in biological systems. The goal of this project was to establish real-time coordinated control of the two axes using an assortment of lightweight, compact, cutting-edge electronics. A software interface was developed using a C Linux API and combined with efficient coding techniques to achieve real-time supervisory control of each motor controller. As a final demonstration, the leg performed a standing jump whereby it exhibited a high degree of performance so that it may be used in a quadrupedal machine capable of a planar gallop. In this thesis, the design methodology for both the hardware and software will be thoroughly discussed. Particular attention is paid in presenting the electrical components and their associated interfaces. A discussion of the significance of the experimental results is also presented, as well as the expected future research potential for the leg.