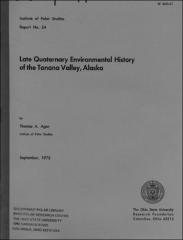 Institute of Polar Studies Report, No. 54.

Pollen histories from three lakes and a peat bog in the middle Tanana Valley, interior Alaska, provide a regionally-consistent record of vegetational changes spanning approximately the last 16,000 years. Lacustrine sediment cores from Birch Lake (64°19’ N Lat., 146°40’ W Long.) and Lake George (63°47’ N Lat., 144°30’ W Long.) yielded the oldest pollen records yet obtained from interior Alaskan lakes. Pollen spectra from the basal sections of these cores are assigned to Pollen Zone 1, and they are characterized by high percentages (20-50%) of both grass and sage (Artemisia) pollen, and lower but significant amounts of sedge and willow pollen. Zone 1 pollen spectra contain only a few percent of pollen of spruce, birch, and alder. The vegetation that produced Zone 1 pollen spectra was a steppe-tundra which probably covered the Tanana Lowland and much of the adjacent Yukon-Tanana Upland during full glacial conditions of the late Wisconsin, until about 14,000 radiocarbon years ago. Inferred climate during the time of steppe-tundra was significantly drier than at present, with a mean annual temperature at least several degrees colder than the present figure of -4°C. Increased continentality probably resulted in warm, dry summers of short duration, and long severe winters. Pollen Zone 2 persisted from about 14,000 years ago until about 10,000 years ago. Zone 2 pollen spectra are characterized by very high percentages of dwarf birch pollen and lower but significant percentages of grass, sedge, and willow pollen. Zone 2 vegetation was a form of shrub tundra. The transition from Zone 1 to Zone 2 appears to have been abrupt and may reflect a sudden climatic change to warmer and moister conditions about 14,000 years ago. Absolute Pollen Influx data (API) show at least a 3-fold increase in the rate of pollen deposition in Zone 2 time over Zone 1 time. Pollen Zone 3 is subdivided into Subzones 3A and 3B. Subzone 3A records the invasion of spruce into the region, beginning roughly 10,000 years ago. Most of the pollen histories from the region show a rather abrupt initial increase in spruce pollen percentages. The Birch Lake Core II record displays a more gradual initial increase however, which suggests that spruce trees did not actually reach the vicinity of Birch Lake, and perhaps the Fairbanks area, until about 9000 years B.P. The invasion of spruce probably proceeded along rivers initially, forming gallery forests surrounded by shrub tundra. By about 9000 years B.P.forests were evidently well-established in much of the region. The spruce invasion suggests a further climatic warming, but the radiocarbon chronology is not yet sufficiently detailed to pinpoint the time of initial increase in spruce pollen in the cores. Therefore, it is uncertain whether the invading spruce arrived from distant refugium many years after the climate had become suitable in interior Alaska, or a few scattered spruce did survive in or near the Tanana Valley during the late Wisconsin glaciations and expanded their range immediately when climatic conditions allowed. Subzone 3B spans the past 8400 years. The boundary between Subzones 3A and 3B is marked by an increase in alder percentages and the onset of a decline in spruce pollen percentages. Spruce pollen percentages and API continued to decline until about 7000 years B.P., perhaps as an indirect result of an interval of warmer, drier climate. Lowland vegetation of the region has undergone no significant change during the past 6500 years insofar as can be discerned from the pollen record.