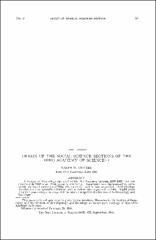 A Section of Psychology operated within the Academy between 1919-1951, but was dissolved in 1954 after three years of inactivity. Geography was represented by occasional, scattered papers until 1932, when a formal section was organized. Anthropology likewise received sporadic attention until a section was organized in 1942. Eight years later this was enlarged in scope and the name changed to the Section of Anthropology and Sociology.