Influence of Clouds and Pollution in the Arctic Region: Some Characteristics of Short- and Long- Wave Radiation at Resolute, Northwest Territories, Canada 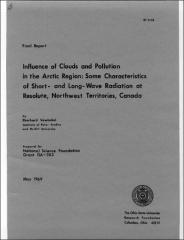 The influence of pollution on short-wave and long-wave radiation was investigated using data from synoptic observations for several years at Resolute (74°4l'N, 94°55'W). The pollution factor in this study is defined as the difference between observed and calculated radiation at the ground. The pollution can, therefore, consist of dust, ice crystals, or other admixture to the atmosphere which does not appear as clouds. Depletion factors for short-wave radiation of 0.04 to 0.06 were found, with a marked increase toward late summer, probably caused by different air mass characteristics. Marked diurnal variations were found in the depletion factor. Because of the uncertainty in the temperature of the emitting surface, the influence of pollution on long-wave radiation could only be established for the case of ice crystals in the air, a common Arctic phenomenon. The influence of ice crystals on the radiation budget was found to be quite substantial, between 3 and 22 percent of the radiation budget. Considering the great frequency of occurrence of ice crystals in Arctic winter conditions, it becomes apparent that the consideration of this pollution factor becomes essential for the energy budget of these areas.