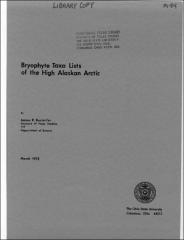 Bryophytes reported previously in the literature are listed for northern Alaska. The geographical area includes the Arctic Coastal Plain and the northern foothills and slopes of the Brooks Range, approximating the area designated the Alaskan Arctic Slope. Annotations concerning reported nomenclatural changes are given for selected taxa. Separate taxa lists are included for five localities designated as Anaktuvuk Pass, Lake Peters, Meade River, Point Barrow, and Umiat. A total of 232 taxa are included.