Driving the Bus: A Look into the Daily Work Experience of Columbus, OH Bus Drivers 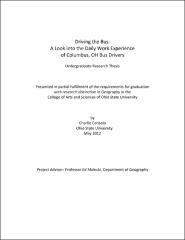 According to the U.S. Census, currently an estimated five percent of Americans commute to work by public transportation, but this is expected to change (McKenzie and Rapino 2011). The demand for public transportation is expected to increase in the future as gas prices continue to rise and as the so-called Millennials, or Generation Y, become increasingly reluctant to own cars. Bus drivers provide a vital service every day to millions of Americans, yet there is little work on what it’s like to be a bus driver and to do their job. There is a considerable amount of occupational health work conducted on urban bus driving and its adverse physical and mental effects. However, these studies have not really asked drivers what it’s like to be a bus driver. Additionally, the existing work done on bus drivers has not asked drivers to identify activity hotspots on a map of their route. For this project, open-ended interviews were conducted with bus drivers from the Central Ohio Transit Authority (referred to as COTA). The interviews were conducted at COTA’s downtown offices in the driver break room. Drivers were asked to identify hotspots along their route and to talk about their experiences on the job. Several surprises arose during the interviews including map reading difficulties and the revelation of an existing network of services between drivers. Reflection on the research process and future work are discussed.