The Transmission of Wycliffite Texts to Bohemia 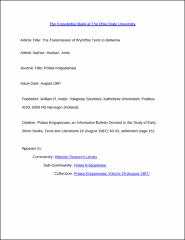 Wycliffe's teaching remained influential in England right up to the Reformation, Wycliffe's most apparent success in the sixty years after his death was far from his native land within the 'coasts of Bohemia'.... The dominant ethnic group at the Charles University in Prague were the Germans who were for the most part confirmed nominalists. The adoption by the Czechs of Wycliffe's realism was evidently the more ardent because it demonstrated their hostility to the Germans. The texts which travelled from England to Bohemia were well cherished in their new home, better far than they were in their native land. Polata 16: 83, 90.