Protestantism and the Development of the Polish Language 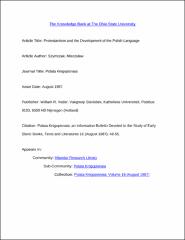 Szymczak looks at "how the Protestant movement affected the development of the Polish language. The Polish Renaissance was a time of the discovery of the world and man; language had to keep up with this development of thought and culture. Language played an especially important part in the struggle to realize the ideas of the Reformation. It participated in a decisive way in the forming of social consciousness. But at the same time it underwent a process of integration and normalization. This was because socially established meanings of words are necessary for the conveying of a message, hence the social demand for a common national Polish literary language." Polata 16: 48.