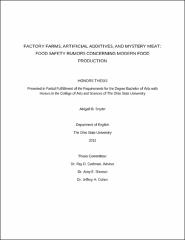 Modern food production and the counter culture which rejects contemporary food products have become the center of much debate among consumers. Blogs and other social networks, personal interviews, and popular images reveal the complexity among these beliefs. Three trends emerged most clearly and were used as the framework for the three main chapters which follow. Chapter one deals with the distrust of large, corporate food businesses. This includes both "factory farms" or large scale agricultural production, as well as food processors and brand names which are viewed as “big business.” While most consumers acknowledge that they cannot produce all their own food, relinquishing production to faceless, amoral, profit seeking companies appears to be an unsatisfying alternative. Chapter two focuses on the concern that modern food is synthetic, fake, and not only less healthy than food that our great-grandparents consumed, but perhaps even unsafe and the root of chronic disease. The notion that aspartame was being considered for biological warfare and is now being sold in bulk for people to sprinkle on their breakfast cereal and mix in their coffee speaks to issues addressed in this chapter. Finally, chapter three involves the sense of control motivated consumers often seek when purchasing food. While individuals cannot realistically produce all their own food, they may attempt to know the people who do and how it is done. This knowledge, coupled with their choice on who to purchase from, empowers motivated food consumers and gives a sense of control over the production in which they are otherwise uninvolved. It is apparent that these three chapters address issues which are closely related. Dividing them into separate chapters is more for convenience than because they represent completely distinct themes as many of the examples speak to multiple ideas. The preoccupations of motivated food consumers are informed by a variety of sources and are equally complex in how they manifest in consumerism and are