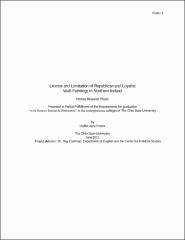 Over the course of the 20th century, the major cities of Northern Ireland have been home to the development of a robust mural tradition. These murals are generally thought of as sectarian displays, propagandizing for either the loyalist or republican side in the conflict collectively known as the Troubles. The evolution of this medium over the past 40 years has given rise to disparate themes in mural content on the two sides, with a few notable similarities. In my study, I am examining how the current breadth of republican mural themes and relative limitation of loyalist mural themes are due to differences in social and political status of the two movements within their broader nationalist and unionist ideologies. To understand this relationship, it is important to analyze not only the literature about mural production by either side, but to have ethnographic input about the public perception of the murals as well. Accomplishment of the second goal will be based on my field work in Northern Ireland conducting casual interviews of laypeople and researchers of the murals. In particular, I will be exploring the changes in thematic content of the murals on both sides and the concurrent evolution of the two paramilitary (republican and loyalist) movements. Although there is a prevailing trend in the literature to frame the two sides as mirrors of each other – both using similar media and organizing in similar ways – I believe a closer examination of the mural content reveals a marked disparity in the artistic license entrusted to muralists on either side. This difference is indicative of a similarly disparate level of social and political status that either side is currently enjoying in Northern Ireland. Studying the presence and content of the murals in Northern Ireland has singular influence on the understanding of ideological interfaces, especially in industrialized nations, and the complex relationship between colonial and colonized populations.