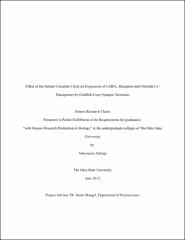 GABA(A) receptors (GABAA Rs) on cone synaptic terminals mediate GABA feedback from horizontal cells to cones and KCC2 expression determines the effect of GABA(A)R activation. Since GABA(A)R expression is dependent on intracellular cAMP and PKA, second messengers which are regulated by the retinal circadian clock, it seems reasonable to postulate that the circadian clock (24-hour) will increase GABA(A)R and KCC2 expression on cone synaptic terminals at night when intracellular cAMP and PKA are elevated. To elucidate the effect of the circadian clock on GABA-mediated feedback from cone horizontal cells to cones, immunohistochemistry was used to visualize the expression of GABA(A)R and KCC2 in goldfish retinas collected at night after dark adaptation and in the day following dark and light adaptation. The results support the hypothesis that the circadian clock increases the expression of GABA(A)Rs and KCC2 on cone terminals at night.