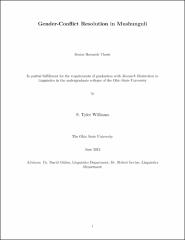 While many languages require some form of subject-verb agreement, perhaps few offer such delightfully complex rules of agreement as Mushunguli, a Bantu language spoken by approximately 23,000 speakers in Somalia. This project presents data from Mushunguli which bear directly on the issue of noun class agreement, and gender-conflict resolution. Previous analyses of Bantu languages make large claims as to the system by which subjects agree with head sentential verbs (Corbett 1991, 1993; Wechsler 2001 etc.), but these analyses only consider semantic consideration, i.e. considerations of meaning, as the source of agreement for most all Bantu languages. Contrary to these analyses, this language shows that indeed formal, syntactic considerations govern these conflicted genders and their respective prefixes of agreement. Mushunguli, as a Bantu language, orginizes nouns into one of 12 noun classes which govern their respective agreement patterns, e.g. a noun such as [m-gosi] 'man', when combining with a verb, requires a class 1 prefix-subject marker (henceforth. Concord Prefix (CP)) [ka-] on the verb, as in the sentence [m-gosi ka-gwa] 'man(1) (1)-falls'. The plural form of the root is then realized by selecting another class's morphology consistent with gender assignment, i.e. class 1 singular, when plural is always realized with class 2 markings , compare: [m-gosi ka-gwa] 'man(1) (1)-fell' with [wa-gosi wa-gwa] 'men(2) (2)-fell'. For clarity's sake, the noun class number has been placed as a subscript below the nominal CP, and the concord prefix will be separated by a '-'. The above examples serve as a template for natural class agreement between subjects and verbs. Gender conflict occurs, when two differing classes simultaneously require a concord prefix on the verb. Such a situation occurs frequently when subject NPs are a part of a conjunction, that is, the noun phrases are conjoined by 'and'. In Mushunguli, this may look like [m-gosi yu-no na chi-bonkho ch-edi wa-gwa] 'This(1) man(1) and the-good(7) hippo(7) 2-fell'. In the previous sentence a Class 1 noun is being conjoined with a Class 7 noun, of which the results of which via natural class agreement cannot be determined. Fortunately, enough empirical data have been collected to reveal that such conflicts are resolved by a totally ordered set of gender. That is, certain noun classes in effect 'win out' (Wechsler 2000) over other prefixes. This analysis maintains that two lexical rules must be created in order to account for the proper resolution of gender agreement. The first, relies on the Head-Subject Inheritance Principle, a central tenant to the syntactic theory of HPSG (Pollard & Sag 1994). This principle, makes visible certain agreement specification of the subject noun for the verb, so that the verb may select the corresponding agreement pattern. This first rule accounts for those examples which demonstrate natural class agreement, i.e. when there is no conflict, but for the gender conflicted structures a new rule must be posited given certain theoretical consequences. The second rule, focuses purely on coordinated structures of the conjunctive variety. Under a theory of HPSG conjuncted structures do not have a single head specifications, and as a result, the above-described head-reliant rule cannot apply to the verb. I argue that the agreement specifications of each noun phrases' head are visible to the conjunction, which in turn computes the join of the pair of conjunct daughter's head AGR specification, thus determining which of the two classes will apply to the verb. The function, inspired by lattices and the notion of logical precedence defines each gender with a ranking of logical precedence, which reflects which class will 'win out'. Critically, these rules work well within the realm of syntax and do not rely on semantic considerations. This is interesting as Corbett (1991) concludes that all Bantu languages resolve conflicts either through meaning or through partial agreement, i.e the noun which is closest in proximity to the verb wins. Yet as can be seen in Mushunguli, this simply is not the case.