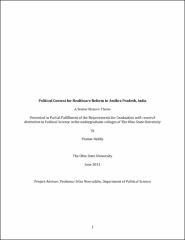 In 2008, the South Indian state of Andhra Pradesh underwent significant reforms of the health care system. Among the reforms, the most significant reform program was the “Rajiv Aarogyasri Health Care Trust,” which was initiated to provide high quality and accessible health care for the poor in private, public, and non-profit tertiary care hospitals in Andhra Pradesh. This research project is both descriptive and analytic. After a description of normative and instrumental goals of reform for the health system, the health system of India and Andhra Pradesh is described. The thesis also provides historical, economic, and political context for the reforms in Andhra Pradesh. Through in-person interviews with key actors in the policy formation and implementation of health care reform, including party officials, members of the executive branch, hospital administrators, and physicians in the field, the political explanations for why health care reform occurred when and how it did can be gleamed. After exploring potential exogenous (non-political) explanations for reform, political determinants such as party and electoral politics, interest groups, institutional factors, and state executive leadership are analyzed. The insights gleaned from this project can be generalized to health care policy in developing countries more broadly to inform the reform process and extricate common conditions and obstacles.

The Undergraduate Research Office; the Department of Social and Behavioral Sciences; College of Arts and Sciences