The Appropriateness of Violence: The Non-Rational Logic of Terrorism 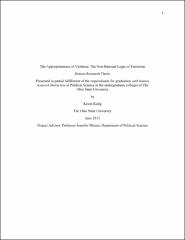 This paper attempts to solve the theoretical and empirical discrepancies between current models and theories of terrorism, largely based on the logic of consequence and rational choice theory, and occurrence of the phenomenon by evaluating the potential fit of the logic of appropriateness, a set of non-rational assumptions. To do this, I have selected statements from four terrorists and terrorist organizations (the Jemaah Islamiya, al-Qaeda, the London 7/7/2004 bombers, and Revolutionary Organization 17 November) to examine whether the logic of appropriateness can possibly describe terrorism better. I ultimately find that for the initial, general decision to use violence, the logic of appropriateness may have more explanatory power, but further decisions may be more adequately described by the logic of consequence and rational choice models.