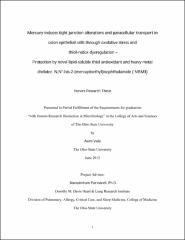 Intestinal permeability, characterized as leaky-gut syndrome, is a debilitating gastrointestinal disorder that leads to inflammation and altered immune response. Tight junctions are crucial for cell-to-cell adhesion and regulation of paracellular transport of molecules across the intestinal epithelium. However, the exact mechanism of the leaky-gut state encountered in autistic spectrum disorders is not known. Mercury, both as inorganic and organic forms, has been identified as a serious environmental pollutant, occupational hazard, and pharmaceutical toxicant. Mercury, in the form of thimerosal in vaccines, has been implicated as one of the causative species of autism. Therefore, here, we hypothesized that mercury would cause intestinal epithelial cell tight junction alterations and paracellular hyperpermeability (leak) through oxidative stress and thiol-redox dysregulation which could lead to the leaky-gut condition. Hence, we investigated the mechanism of tight junction alteration and paracellular leak of macromolecules in the well-established in vitro intestinal (colon) epithelial Caco-2 cell model. We also identified efficacy of the thiol-redox stabilization drugs to protect against the mercury-induced damage in the Caco-2 cells in vitro. Our studies revealed that the two forms of mercury, methylmercury and thimerosal caused (i) dose- and time-dependent cytotoxicity (lactate dehydrogenase release, decreased mitochondrial integrity, and cell morphological alterations), (ii) loss of intracellular glutathione (GSH), (iii) increase in the formation of reactive oxygen species, (iv) loss of barrier dysfunction; (v) loss of cell proliferation, (vi) actin cytoskeletal rearrangement (actin stress fiber formation), (vii) tight-junction (ZO-1 protein and occludins) alterations, and (viii) increase in paracellular leak of macromolecules in Caco-2 cells in vitro. Mercury-induced cytotoxicity, tight junction alterations, and increase in paracellular leak were significantly attenuated by the novel lipophilic thiol-redox-stabilizing antioxidant and heavy metal chelator, N,N’-bis-(2-mercaptoethyl)isophthalamide (NBMI). For the first time, the results of the current study demonstrated that mercury (methylmercury and thimerosal) caused intestinal epithelial cell damage and macromolecule leak through thiol-redox dysregulation and oxidative stress which was effectively protected by the novel lipophilic thiol-redox stabilizer and heavy metal chelator, NBMI. Our findings emphasize the significance of altered cellular functioning by the intestinal epithelium upon exposure to mercuric agents, and pharmacological attenuation by the novel drug, NBMI.