Increasing quantity of parental talk to two-year-olds through intervention: Effects on quality of interaction and facilitative language 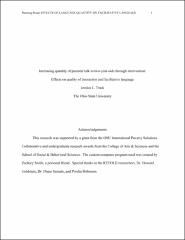 Researchers have found that parents in low-income families tend to speak less to their children than parents in middle- and high-income families. The cumulative effects of this disparity result in a higher prevalence of language and academic difficulties among children from low-income families. This study extended an existing project at The Ohio State University, Project RETOLD, which aimed to design an intervention to increase the quantity of parental talk to two-year-olds in low-income families. A recording device and automated analyses estimated the quantity of language in number of adult words spoken per day as well as number of conversational turns between adult and child. The intervention sought to bring families up to the 50th percentile in both categories. While this intervention was successful, it remained unclear whether the quality of interaction or the amount of facilitative language improved along with the quantity. To investigate this question, samples of parental speech at baseline and after intervention were transcribed to determine whether changes in the quantity of language were associated with changes in the quality of talk and the use of facilitative language. Many indicators of the quality of language were measured, including types of questions and feedback, conversation initiations and responses, and vocabulary diversity. A significant improvement in quality overall was noted, although this improvement may be due to the success of only two variables; raw numbers still remained low and changes did not represent the well-rounded improvements hypothesized. This intervention has seen some obvious success, however, these results have implications for investigating modifications in intervention procedures to promote more facilitative language overall.