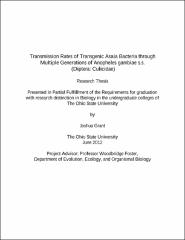 Vector-borne diseases impact millions each year and as a result many endemic countries face slow economic growth and enormous health costs to treat these diseases. It has been well documented that resistance to insecticides and drugs is spreading. Recently, the use of genetically modified vectors has been one proposed method of control, and while generating a refractory vector has been accomplished, a method for replacing the wild population has not been found. Another possible pathway for controlling the disease is to genetically alter the bacterial gut symbionts found in the vectors, thus providing an effector molecule to inhibit the disease in the wild population. In this study, we conducted two separate experiments to determine if the genetically modified bacteria could be transmitted to the offspring 1) in an environment that was free of antibiotics and 2) where naturally occurring microbes would be present. A portion of an adult Anopheles gambiae population was infected with Asaia bacteria that had been genetically modified to express a red fluorescent protein (DsRed). The mixed population was then released, the females allowed to blood feed and oviposit, and the offspring reared to adulthood. The results from the experiments indicated that naturally occurring microbes could be interfering with the transmission of the modified Asaia or that vertical transmission was insufficient to provide enough bacteria to successfully inoculate the offspring.