In Vitro Selection of RNA Aptamers That Bind Human LysRSdN65 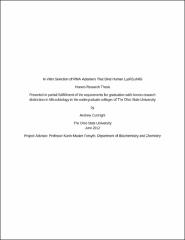 Upon infection, HIV-1 begins to reverse transcribe its RNA genome into DNA utilizing tRNALys,3 as the primer for this process. Though found within the host, it has been shown that HIV-1 requires tRNALys,3 to be packaged at the time of assembly in order for budding virions to become infectious. Packaging of tRNALys,3 occurs through an interaction between the lysyl-tRNA synthetase (LysRS)-tRNALys,3 complex and the HIV Gag-GagPol complex. Inhibition of the host-viral protein interaction occurring between LysRS and Gag presents a potential anti-retroviral strategy. The goal of this project is to discover RNA molecules or "aptamers" that bind LysRS thereby disrupting the interaction with HIV Gag. Systematic Evolution of Ligands by EXponential enrichment (SELEX) is being used to impose an artificial selection on a pool of randomly constructed RNAs. By iteratively separating bound RNA from free RNA, the pool is progressively enriched with molecules which possess a high affinity toward the target protein. After seven rounds of selection, a pool of random RNA demonstrates an enhanced ability to bind LysRS∆N65. Sequence analysis of the pool reveals four homologous regions conserved between unique sequences. These conserved regions fold into stem-loop structures which may play an important role in specific binding to LysRS. Individually isolated aptamers may prove capable of inhibiting the interaction between human LysRS and HIV Gag.