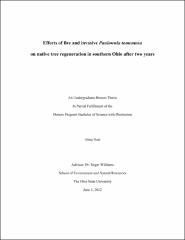 Paulownia (Paulownia tomentosa) is a tree native to southeast Asia that has shown invasive behavior in the eastern United States. The objective of this project was to determine the effects of paulownia invasion, wildfire, and harvesting activity on native tree seedling growth and establishment, including red maple (Acer rubrum), yellow-poplar (Liriodendron tulipifera), white oak group species, and red oak group species (Quercus spp.). The study took place during summer 2011 in Shawnee State Forest near West Portsmouth, Ohio, where a wildfire burned approximately 1175 hectares in April of 2009. The majority of the burned areas were salvaged the following summer. In general, paulownia had negative impacts on red maple, red oak group species and white oak group species seedling heights and density. However, this was generally not the case with yellow-poplar. This is most likely because paulownia and yellow-poplar both exhibit early successional traits and thrive in similar microsite conditions. The presence of fire and harvesting was generally associated with decreased numbers of red maple, red oak group species, and white oak group species seedlings, but the seedlings were all taller. This suggests that fire and harvesting may accelerate seedling growth through competition reduction, nutrient cycling, and increased sunlight, which is consistent with other research. Fire and harvesting were associated with higher yellow-poplar seedling density, likely because the resulting soil scarification enabled greater yellow-poplar seedling establishment. Paulownia also appears to benefit from the effects of fire and increase competitive capabilities, as it was associated with significantly fewer red maple and white oak group seedlings in the plots with fire, harvesting, and paulownia than in the plots with paulownia but without fire and harvesting. While paulownia is a non-native species that invades open areas, it may not persist in mature forest areas where the canopy is too dense to regenerate this shade-intolerant species, and therefore may not be as persistent in a particular area as other invasive species. Further studies should establish permanent plots to monitor the effects of paulownia on native seedlings as they mature, determine any allelopathic relationships between paulownia and native species, and examine potential beneficial relationships between paulownia and yellow-poplar. To investigate the possibility that paulownia will not persist in mature forests, studies should also be conducted to monitor its existence and ability to reproduce and persist in mature forest areas over several years.