On the Origin of Species: The Madeira River as a Barrier for Small Mammals in the Amazon 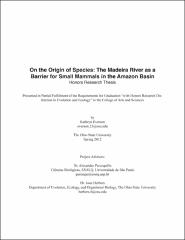 Barriers to dispersal (and hence gene flow between populations) represent an important causal factor promoting speciation. The Amazon River and its major tributaries have been the focus of numerous biogeographical studies because of their potential role in isolating populations. One New World marsupial, the woolly mouse opossum [Marmosa (Micoureus) demerarae], currently occupies the entire Amazon Basin, but recent studies have identified distinct, highly-divergent phylogroups across the region. In fact, this taxon may represent several cryptic species, but the potential role of rivers for isolating populations is unknown. The aim of this study was to investigate both morphological and genetic variation among M. demerarae populations that straddle the Madeira river, the largest Amazonian tributary. We examined biogeographical patterns of morphology and genetic variation to ascertain the importance of isolation by distance (up- versus down-river), as well as whether the Madeira serves as a barrier to gene flow for these mammals. We measured 45 morphological characters from preserved museum specimens and analyzed the data via principal components analysis and discriminant analysis. Genetic data were derived from sequences of the mitochondrial cytochrome b gene, which we analyzed via F-statistics and network construction. We found strong genetic differentiation between populations on different banks of the river (FST = 0.62832, p<0.0001), but morphological differentiation was comparatively weak; there was no evidence of isolation by distance on either side of the river. Our study provides compelling evidence that the Madeira and other large rivers can serve as barriers to gene flow, at least among small mammals.