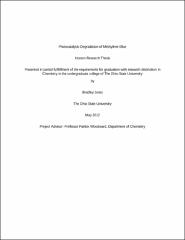 Photocatalysis is a booming field of chemistry due to its numerous potential applications. Using light as an energy source to drive a reaction results in chemistry that is much more ‘green’, helping to eliminate the need for harsh reactants which are often toxic and unrecoverable. Photocatalysis also has applications in the area of renewable energy. A photocatalytic compound could be used to split water into hydrogen and oxygen for energy purposes. This project focuses on the screening of potentially photocatalytic solid state inorganic salts by using these materials to degrade methylene blue, an organic dye, in aqueous solution. Primarily tungstate and vanadate salts were tested for their photocatalytic activity though the degradation of methylene blue in solution under a xenon arc lamp. Select compounds show considerable photocatalytic activity. Solid state synthesized BiVO4 reduced the absorbance of the methylene blue solution by 30% after 3 hours, the degradation increased to 85% over the same time period when the BiVO4 catalyst was prepared by an aqueous precipitation route.. Vanadate compounds of the form LiZnxCo1-xVO4 also exhibited photocatalytic activity. Other vanadates and tungstates were evaluated but did not demonstrate photocatalytic activity. These non-active compounds include Zn1.5VO4, Zn1.35M0.15VO4 (M=Ni, Cu), and Na0.5Ce0.25A0.25WO4 (A=La, Ce, Bi), amongst others.