Self-Concept in Muslim Adolescent Girls: Hijab and the School Experience 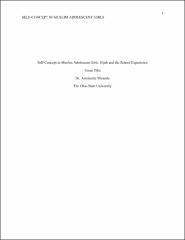 The hijab (head covering) worn by Muslim women has been defined as; a sign of liberation or a constraint, obligation to God or submissiveness to men, equality or oppression, and freedom or objectification and degradation by the exploitation of men. The interpretation of the hijab has generated confusion as well as ignorance within the Western mainstream society, media and school curriculum. Previous research suggested that negative experiences of minority groups may or may not be factors that relate to self-concept. Thus far, no research exists on how negative experiences in school can be related to a Muslim girls' self-concept. This research seeks to extend the limited existing research that examines young Muslim girl's experiences in Central Ohio schools as it relates to the wearing of clothing that identifies them as Muslim. The researcher interviewed participants as part of a focus group to share their perspectives on the hijab and their school experiences. A questionnaire was developed that measured religious affiliation and included demographic information. And finally, participants were asked to complete the Harter’s (1988) Adolescent Self-Perception Profile Assessment (SPPA) to measure self-concept. Results showed that participants on average received a positive self-concept within the seven domains except the Athletic Competence (average mean of 2.29 (out of 4) In addition, due to the small sample size of diverse ethnicities and those reported not wearing the hijab, there were no relevant relationships that presented significant results. Furthermore, this study indicated four common themes (hijab as a choice, intention, experiences in school, and the pressure to be beautiful) that were expressed in the focus groups to illustrate personal stories including exclusion in sports in school due to wearing the hijab. This study provides personal experiences of Muslim girls who wear or do not wear the hijab in schools, and implications for future research on the self-concept within this population.