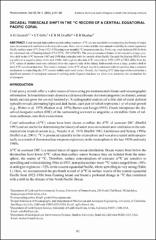 Coral skeletal radiocarbon records reflect seawater Δ^14C and are useful for reconstructing the history of water mass movement and ventilation in the tropical oceans. Here, we reconstructed the inter-annual variability in central equatorial Pacific surface water Δ^14C from 1922–1956 using near-monthly 14C measurements in a Porites sp. coral skeleton (FI5A) from the windward side of Fanning Island (3°54'32"N, 159°18'88"W). The most pronounced feature in this record is a large, positive shift in the Δ^14C between 1947 and 1956 that coincides with the switch of the Pacific Decadal Oscillation (PDO) from a positive to a negative phase in the mid-1940s. Although the absolute Δ^14C values from 1950–1955 in FI5A differ from the Δ^14C values of another coral core collected from the opposite side of the island, both records show a large, positive shift in their Δ^14C records at that time. The relative increase in the Δ^14C of each record is consistent with the premise that a common mechanism is controlling the Δ^14C records within each coral record. Overall, the Fanning Δ^14C data support the notion that a significant amount of subtropical seawater is arriving at the Equator, but does not allow us to determine the mechanism for its transport.