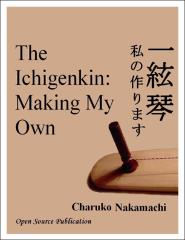 Originally the ichigenkin was played by scholars, samurai and zen priests, who considered the instrument as a means of self improvement. Much like ikebana (flower arranging), and chadou (tea ceremony), playing ichigenkin was considered a martial art, and practice was considered a form spiritual training. It wasn’t a major performance instrument. Now, it is mainly played by women (though a few men are also finding it compelling) as a source of self expression. Still, it carries with it considerable potential for adaptation to a more modern audience, while keeping its cultural ambiance. This is how I made my own.

Copyright © 2012 Charuko Nakamachi Published as open source. Distribution for sale, barter, exchange, profit, or any economic benefit is strictly prohibited. Everyone is permitted to copy and distribute verbatim copies of this publication in its entirety for free, for educational purposes only. Modifying this publication, copying it in part, or changing it in any way is also prohibited. We do encourage making improvements to the ichigenkin design and creating separate documentation of those improvements. If you make improvements to the designs in this work, we ask that you acknowledge this work as a reference source in any documentation resulting from such improvements. Such a reference may be noted as: Nakamachi, Charuko, The Ichigenkin: Making My Own, 2012, Published as open source.