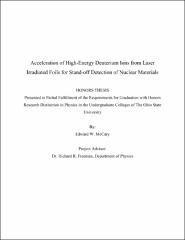 Proliferation of controlled nuclear materials poses a threat to the security of the United States. High-energy neutrons can be used in the noninvasive detection of these materials. The neutrons are generated from fusion reactions in proton rich or deuterium rich solids that are bombarded by energetic ions. Deuteron ions, accelerated from the rear-surface of laser-irradiated flat-foil targets, have been produced with energies up to 3.5 MeV. The observations were made using a Thomson Parabola Spectrometer. Deuteron ions have been accelerated from a contaminant-free layer of heavy ice coated onto the rear surface of a thin foil. Compared to earlier experiments using deuterated plastic as an deuteron source, a more than ten-fold increase in the deuteron flux was observed while the flux of contaminants was almost completely eliminated. In these experiments, the peak ion energy was observed to increase by a factor of two.