Addressing the Human Health Impacts of Climate Change: The Role of Individual Attitudes, Perceptions, and Beliefs in Agency Action 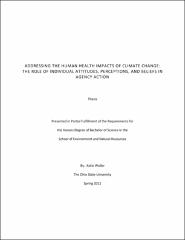 Despite the scientific consensus that global climate change is currently underway, public health agencies in the United States fail to exemplify the practice of preparedness in anticipation of the negative impacts a changing climate will have on human health. It is critical to identify why public health agencies are not taking action so as to identify how to engage them in preparing the public for the most relevant health risks. Individual decisions based on values and personal beliefs rather than on scientific evidence might help explain why critical mitigation and adaptation measures are not in place to address the predicted health impacts of climate change. To that end, we surveyed Nursing Directors around the United States to determine how their individual attitudes, perceptions, beliefs, and knowledge about climate change and its related health impacts might help explain agency responses, or failures to respond, to such health risks. It was expected that female Nursing Directors with a positive environmental attitude and a liberal political ideology would have more positive attitudes toward taking action and higher perceptions of risk, responsibility, and control in relation to climate change and human health. The results of this study indicate that despite positive attitudes toward taking action, most departments do not have any programs in place and Nursing Directors often do not feel a personal sense of responsibility or departmental ability to take action. Environmental attitude, political ideology, risk perception, and perceived levels of control and responsibility each made unique contributions in explaining the variation in Nursing Directors’ attitudes towards action. Programs that provide information about the relevant health impacts, as well as work to increase individual directors’ sense of responsibility and risk and that are sensitive to political ideology may help motivate attitudes and behaviors conducive to taking action and increased public health preparedness.