Narcissism and the Motivation to Engage in Volunteerism 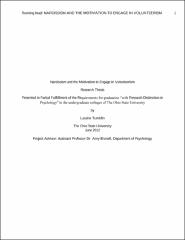 Research suggests that volunteerism and narcissism are at all-time highs amongst young people (Corporation for National & Community Service, 2007; Twenge & Campbell, 2009). The present study used a Self-Determination Theory (Deci & Ryan, 2000; Ryan & Deci, 2002) framework to understand why people volunteer and examined whether volunteer motivation was associated with narcissism. Because narcissists strive to self-promote (Wallace, Baumeister, & Vohs, 2005), it was predicted that narcissism would be positively associated with extrinsic motivations to volunteer (e.g., enhancement) and negatively associated with intrinsic motivations to volunteer (e.g., enjoyment). For the study, 350 participants completed a series of personality inventories, including inventories of narcissism, empathy, and self-esteem. Participants then completed a questionnaire that assessed if they had volunteered over the past 12 months and why they volunteer. When narcissism was measured with a composite measure consisting of entitlement, exploitativeness, and grandiosity, narcissism was positively associated with identified/integrated, introjected, and external motivations, even while controlling for self-esteem and empathy, suggesting that narcissists experience more pressure to volunteer. When narcissism was measured with the Narcissistic Personality Inventory (NPI; Raskin & Terry, 1988), results failed to predict volunteer motivation, supporting concerns about instrument content validity (e.g., Brown, Budzek, & Tamborski, 2009). Findings suggest that narcissists are highly motivated, even in the realm of volunteering. Implications concerning volunteering with a narcissist are discussed.