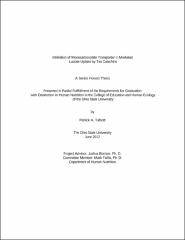 Tea compounds such as epigallocatechin gallate (EGCG) are antioxidants that may have positive effects during the treatment of many diseases, including cancer and HIV. After water, tea is the second most consumed beverage worldwide and has been included whole and in part in many dietary supplements. Catechins, the primary class of health related polyphenols found in tea, and have been associated with decreased rates of gastric cancer among certain populations. Although the mechanism by which catechins are absorbed is unknown, they are stable in acidic environments such as the stomach and could therefore have an effect on gastric cancers. One mechanism through which catechins such as EGCG could have an effect is by inhibiting monocarboxylate transporters such as MCT-1, which bring lactate, a criticial compound in tumor metabolism, into tumor cells. The present study uses the BCECF Assay to determine whether or not EGCG has an inhibitory effect on lactate uptake compared to a known inhibitor, phloretin. Using two stomach cancer cell lines, lactate uptake has been shown to decrease in the presence of EGCG. Additionally, other catechins have been shown to have an inhibitory effect.