Being Amerasian in South Korea: Purebloodness, Multiculturalism, and Living Alongside the U.S. Military Empire 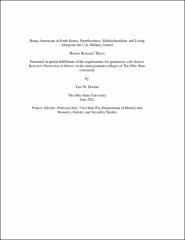 This thesis focuses on the history of U.S. neo-colonialism in South Korea through the lens of mixed race Amerasians—a population generally regarded and understood to have been produced through the liaisons between South Korean camptown women and American military personnel. In this project, I discuss the historical and contemporary status and identity of mixed race individuals in South Korea as the country's national ideology evolved from an embrace of purebloodedness to multiculturalism. My analysis is chronologically framed around intercountry adoption policies in the years immediately following the Korean War (formed to excise the presence of mixed race GI babies from South Korea) and state-sponsored multicultural policy initiatives beginning in 2005. I research the production of Amerasian subjectivity and identity in South Korea over the past six decades through an analysis of pureblooded constructions of Koreanness, U.S. militarism and camptowns, androcentric Nationality and Family Laws, contemporary multicultural policy formations, and the popular culture and lived experiences of Amerasians in South Korea. I also offer a comparative analysis of a new mixed race group in South Korea called Kosian (Korean/Asian). I critique multiculturalism in South Korea, which targets this emerging Kosian demographic, arguing that multicultural policy is primarily one of assimilation rather than a recognition of cultural and racial differences. I suggest that the marginal status of mixed race Amerasians has not changed much since the Korean War and is linked to South Korea’s persistent status as a neo-colony of the United States—a history of national shame and subjugation that Amerasians have come to symbolize. Primary sources for this study include legal and government documents, popular media representations, interviews with pureblooded Koreans, as well as oral histories of Amerasians that I conducted in South Korea during the summer of 2011.