Mexican Immigrants' Views of the Spanish Dialects in Mexico: A language attitudes study 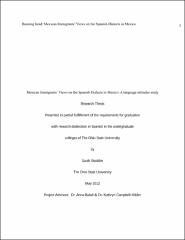 Since the 1960s, sociolinguists have been examining the social factors that influence language variation and the attitudes speakers have towards those variations. In this study, the language attitudes about the perceived Spanish dialects in Mexico held by Mexican immigrants is analyzed using a map-task. Subjects were asked to draw on a map of Mexico where they felt that people speak Spanish differently. They were then asked to explain/elaborate on the divisions that they drew. Perceptions of dialects are measured via reoccurring themes that seem to be important to Mexican speakers such as use of slang, urban vs. rural, and influence of English. [language attitudes, Mexican immigrants, Spanish, variation]