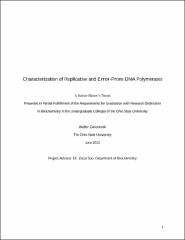 DNA Polymerase II (Dpo2) and DNA Polymerase III (Dpo3) are novel enzymes from Sulfolobus solfataricus, a hypterthermophilic Archeon. Other than Dpo2 and Dpo3, S. solfataricus also encodes a replicative DNA polymerase Dpo1 (or named PolB1) and a DNA-lesion bypass DNA polymerase Dpo4. Dpo1, like Dpo2, and Dpo3, is a B-family DNA polymerase while Dpo4 belongs to the Y-family. Based on our preliminary data and others’ publication, both Dpo2 and Dpo3 are characterized as having low polymerase activity and poor 3’ 5’ exonuclease activity, indicating that they are particularly inactive and error-prone DNA polymerases. Additionally, Dpo2 and Dpo3 have been shown to be involved in DNA translesion synthesis, a DNA repair process in which a polymerase, often with a larger active site, incorporates a deoxynucleotide opposite a damaged nucleotide. The project will involve circular dichrosim spectroscopy for both Dpo2 and Dpo3. The purpose of the circular dichroism experiments is to determine whether or not Dpo2 and Dpo3 are thermostable compared with Dpo4, another Sulfolobus solfataricus B-family DNA polymerase that is presumably involved in DNA lesion bypass repair. In addition to studies involving Dpo2 and Dpo3, I will look at human DNA Polymerase epsilon the main replicative polymerase involved in leading strand synthesis. I will discuss the optimization of the purification of exonuclease-deficient pol epsilon as well as the approach taken to purify pol epsilon. I will also discuss several kinetic assays performed in the analysis of both exonuclease-deficient pol epsilon and wild-type pol epsilon. Lastly, I will discuss approaches taken toward the design of exonuclease-deficient mutations for Dpo2 and pol epsilon.