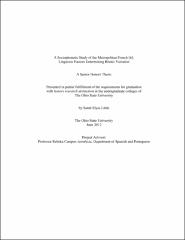 /R/ sounds display much variation in many of the world’s languages, being vulnerable to changes in their pronunciation. This unstable type of sound is found in French. Many linguists have studied the /R/ sound variation of different dialects around the Francophone world, such as French-speaking Africa or Canadian French. However, the variation found within France has not been thoroughly investigated. I initiated this research with the aim to further our understanding of the linguistic evolution of speakers living in France. This project seeks to prove that differences in /R/ pronunciation can be attributed to various social factors, such as gender, age, and contact with other languages, as well as linguistic factors such as stress and surrounding sounds. This study analyzes the speech of Paris-native speakers or those who have lived in the city for an extended period of time. For this purpose, I recorded these speakers performing three tasks: reading a list of words, which they had to put into sentences; a picture description; and an informal interview. After having analyzed most of the data, I have found that the speakers who have contact with other languages (specifically African creoles) show cases of pronouncing the /R/ similar to a vowel and have cases of trills (the Old French pronunciation), which are not found in the other speakers. In addition, the younger speakers show signs of exposure to a more recent phenomenon: a weakening of the sound. These results suggest that the behavior of French speakers in France is different from other dialects since they display an evolution in their language in which the French /R/ is shifting to a completely different sound. These findings shed light on the origin of language changes in Standard French, Paris, and help us predict when French speakers can expect an upcoming linguistic phenomenon.