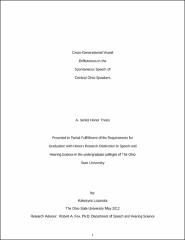 The Northern Cities Shift is a vowel chain shift (a type of sound change) that occurs in the Northern dialect region, including Northern Ohio. Consensus in the research literature is that the Northern Cities Shift is not operative in central Ohio but data that support this position are relatively old. Recent findings have suggested that speakers in the Central Ohio region do participate in a chain shift. However, the data supporting this view are based on recordings from read speech obtained under careful laboratory conditions. Spontaneous speech samples have not as yet been analyzed. The purpose of this study is to determine whether or not elements of the Northern Cities shift have spread to the spontaneous speech of Central Ohio speakers as seen in changes the positions of vowels in the acoustic vowel space across age groups. A pattern of vowel position changes would indicate a chain shift in progress. Previously collected recordings of spontaneous speech samples were transcribed and analyzed acoustically. Stressed words that contained one of the six vowels in the Northern Cities Shift were selected for analysis. The speech analysis programs Adobe Audition and TF32 were used to analyze each word token. Acoustic measurements made included word and vowel duration and the frequencies of the first three formants at three points in time (to allow an examination of spectral change). Statistical analysis of these data is still undergoing but is close to completion. Preliminary results indicate that the Northern Cities Shift is not operative in Central Ohio. However, there are more recent changes to these vowels which were found in the children’s spontaneous speech which are in agreement results from read speech. Preliminary results imply that dialect boundaries are strong and dialect features do not spread freely as a function of population mobility or incidental interpersonal contacts.

Social and Behavioral Sciences
College of Arts and Sciences