An acoustic study of sound change in progress 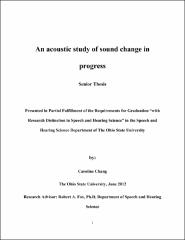 There are many different regional dialects of American English most of which differ as a function of vowel quality—historically, these vowel differences are a product of sound change over time. The current project focuses on the North and Midland dialects of English for the purpose of identifying ongoing changes in vowel pronunciation. The most prominent mechanism of vowel shift in the Northern dialect is called the Northern Cities Shift (NCS). The Midland dialect has long been considered to not be participating in the NCS, but the data are somewhat dated. The question addressed in this study is whether the NCS is still operative in the Northern dialect and/or is now operative in the Midland dialect. We will compare recordings of speakers (from three different age groups) from southeastern Wisconsin (representing the Northern dialect) and from Central Ohio (representing the Midland dialect) in terms the acoustic properties of a set of six vowels known to participate in the vowel shift (with special focus on two vowel classes called the LOT and the STRUT vowels). Speakers produced 13 different sentences containing these vowels in a stressed position. The speech analysis programs Adobe Audition and TF32 were used to analyze each token. The acoustic properties of these vowels included vowel and word duration and the first three formant frequencies measured at five points in each vowel (to allow examination of spectral change). Statistical analysis of these data is now close to completion. However, preliminary results suggest that some aspects of the NCS are not found in Wisconsin speakers (e.g., the fronting of the LOT vowel). The expected pattern is found in the Ohio Speakers.