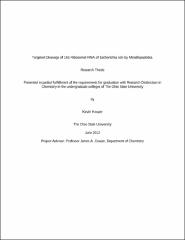 Copper was bound to modified peptides that selectively target the 16S ribosomal RNA of Escherichia Coli (E. Coli) and contain an amino terminal copper and nickel binding motif; and subsequent RNA cleavage studied. The metallopeptides (shown in Figure 1) Cu-GGHHPVHHYQ, Cu-GGHGHPVHHYQ, Cu-GGHGGHPVHHYQ, Cu-GGHGWRWYCR, and Cu-GGHGLPLTPLP were able to effectively transport the reactive metal center to the Fl-16S-rRNA to perform cleavage reactions. Initial cleavage rates were analyzed by polyacrilamide gel electrophoresis (PAGE) and found to be up to 120 nM/min with coreagents H2O2 and ascorbate, up to 2 nM/min with ascorbate, and up to 2.4 nM/min with no reagents. Matrix assisted laser desorption/ionization- time of flight mass spectrometry (MALDI-TOF MS) was used to detect RNA cleavage fragments with 6 easily identifiable nascent overhangs; 3’-hydroxyl , 2’,3’-cyclic phosphate, 3’-phosphate, 3’-phosphoglycolate, 5’-hydroxyl, and 5’-phosphate at specific sites along the RNA sequence. Apparent initial rates of reaction were also determined from MALDI-TOF MS that were generally agreeable with initial rates determined by PAGE. The program MassDaddy (Jeff Joyner) was used to analyze mass spectra by comparing observed mass peaks to expected mass lists for cleavage products within a mass matching error of 200 ppm. This series of metallopeptides, with special focus on the hydrolytic cleavage shown by GGHGWRWYCR, shows promise in being able to target the 16S ribosomal RNA of E. Coli and function as an antibacterial drug.