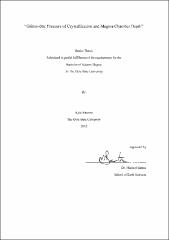 Volcanoes in Iceland pose an enormous threat to not only the environment but a large portion of the population due to the sheer number and potential destruction that lies under each one. Grimsvötn, being the most frequently erupting volcano in Iceland, is a great locality to develop more of an understanding into how these volcanoes actually work and what we can do to better prepare ourselves for future events. Basaltic glass samples were taken and analyzed using various methods in order to determine partial pressures of crystallization. From this we can deduce magma chamber depth and interpret through various petrological methods, a possible system which lies beneath the volcanoes. As a result of completing this procedure we have concluded that the data are best explained by the presence of a complex plumbing system, consisting of both a shallow and deep chamber, and plexus of small chambers at various depths, or a deep chamber linked to the surface by dikes. Similar models have been proposed for the plumbing systems beneath other volcanoes in Iceland.