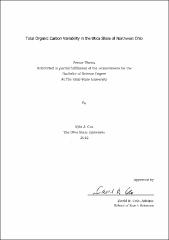 The Utica Shale is an Ordovician age rock unit found throughout most of Ohio and much of the Northeastern United States. Recently, the Utica’s potential as a source and reservoir for hydrocarbons (oil and natural gas) has become an important topic in Ohio. If the Utica contains large amounts producible of oil and gas, the economic impact on the state could be very significant. Due to its hydrocarbon generating potential, there is a great amount of ongoing research focusing on the Utica. Most of this investigation targets the Utica in Eastern Ohio since geologic factors in the area (history of oil and gas production, the unit resides within a window of ideal formation depth below the surface) and preliminary explorations indicate a high likelihood that producible amounts of hydrocarbon reside in the formation in that part of the state. Similar factors (though not as ideal) may exist in the Northwestern portion of the state, however little research has considered this area. The purpose of this study was to investigate the hydrocarbon potential of the Utica Shale in Northwestern Ohio by measuring TOC values of rock samples from the area, and investigating how these values vary throughout the area. Total Organic Carbon, more commonly referred to as TOC, is one important indicator of a geologic units potential as a source rock. It is a measurement of the concentration of organic material in a rock which is necessary for the generation of hydrocarbons. TOC measurements from the Utica in Northwest Ohio were obtained by acidifying rock samples from the Utica in the study area to remove Inorganic Carbon from the samples followed by combusting them in an Elemental Analyzer which measured the remaining, and thus organic, Carbon. 34 samples were obtained from 16 wells in 10 counties of Northwest Ohio. Results showed limited hydrocarbon potential for the area. The average TOC was 1.38% and the 34 samples ranged from 0.73 to 2.75% TOC with the majority of samples falling between 1 and 2%. No strong trends in the variability of the TOC by location were identified. Future research following the same methodology with a larger sample area or a closer-spaced sample frequency across the study area could reveal trends that were too broad or narrow to be identified by measuring the sampled wells.