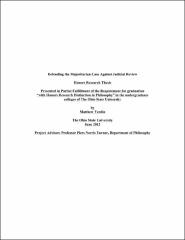 Jeremy Waldron, in Law and Disagreement, argues that judicial review by institutions such as the United States Supreme Court, where largely unaccountable judges have final say on important political issues, is incompatible with democracy. An essential premise to his argument is majoritarianism, which is the view that the citizen majority’s view on any given political matter should be decisive in a democratic system. In this article, I will evaluate Waldron’s arguments against judicial review in light of criticisms of his majoritarianism by Ronald Dworkin and others. I will argue that modified versions of Waldron’s positions on both majoritarianism and judicial review can be successfully defended against those criticisms. The essay will proceed as follows. First, I discuss what Waldron characterizes as the circumstances of politics, including reasonable disagreement and a felt need for common action with regard to important political issues. This problematic situation can be separated from Waldron’s substantive conclusions in a manner that provides a common framework for thinking about the decisional problem brought about in politics. Second, the circumstances of politics will be shown to require political institutions that are justifiable to all reasonable citizens. In this way, any legitimate political institution must be, in some sense, beyond reasonable disagreement. Third, I will examine two prominent solutions to this problem: (1) Waldron’s procedural solution arguing that only fair procedures can be free of reasonable disagreement and (2) Dworkin’s substantive solution arguing that at least some considerations of substantive fairness are beyond reasonable disagreement. Fourth, Dworkin’s robust substantive solution will be shown to lack any independent criteria by which to judge better or worse outcomes, and for that reason is not justifiable to all reasonable citizens. Rejecting robust substantive solutions, I will argue that Waldron’s majoritarianism as a procedural solution can be defended against Dworkin’s objections that substantive political inequalities are present in a majoritarian system. Fifth, I will consider the objection that Waldron’s majoritarianism is subject to reasonable disagreement (1) in particular contexts and so is itself controversial as a principle, and (2) in the inclusion of undefended substance in majoritarianism. In response to the former, it will be argued that though the use of a majority decision-procedure in specific contexts is controversial, it is uncontroversial as a general principle in second-order contexts. In response to the latter, it will first be conceded that majoritarianism is indeed thinly substantive. The original distinction of procedure vs. substance will be shown as only helpful in relation to robust substantive views, such as Dworkin’s solution. On the basis of a very thin substance that draws on Waldron’s pre-existing defense, I will show that majoritarianism is an uncontroversial general principle, and so maintains its status as a legitimate decision-procedure. This thin substance will primarily be conditional upon the belief that all are entitled to basic rights, and that when combined with the permanent circumstances of politics, this assumption necessitates a fundamental right to participate, and thus orients all citizens as the proper source from which to derive opinions regarding important political decisions. Finally, after having defended a modified majoritarianism as a legitimate political institution, I will analyze the compatibility of judicial review with that modified majoritarianism. I will first present what is ordinarily thought to be at stake in the debate over the legitimacy of judicial review. Then, I will demonstrate that American-style judicial review is a prototypical instance of the judicial review that concerns theorists like Waldron. Third, I will argue that judicial review is incompatible with majoritarianism only in the instances where the majority is unable – by whatever means the majority deems appropriate – to reverse or alter the decisions of the Justices. Finally, I will show that the inclusion of thin substance into a modified version of Waldron’s majoritarianism qualifies the case against judicial review only insofar as it is controversial that all citizens are entitled to basic rights.