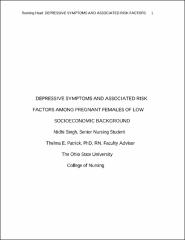 Objective: The purpose of the study is to describe factors associated with depression during pregnancy among females of low socioeconomic background. Background: Depression during pregnancy may lead to (1) depression following delivery (2) increased likelihood of low birth weight babies and preterm deliveries and (3) longer-term effects on maternal-infant interaction. Younger women and women of African-American race are at greater risk (National Center for Health Statistics 2002). Risk factors associated with depression during pregnancy are high psychosocial stress levels, less education, preexisting medical conditions and low socioeconomic status. We describe the incidence of depressive symptomology and associated risk factors among pregnant females of low socioeconomic background. A descriptive, exploratory design was employed with data collected from participants in the MOMS2B project. The parent study uses concepts from the social determinants of health model. Pregnant women from a neighborhood in which single, predominantly African-American and low-income women reside, were recruited to participate in MOMS2B, a nutrition education and social support program, and respond to questionnaires regarding health behaviors. Methodology: Depressive symptoms were measured using the Center for Epidemiologic Studies Depression Scale (CES-D) a 20-item instrument that is used to assess depression in general population. The CES-D was administered at weeks 2, 5, and 10 in the 10 week program. Sample: 26 women have completed CES-D, (N=26 at week 2, N=20 at week 5, and N=12 at week 10). Fewer women were available for week 10 assessments as they delivered prior to completion of all sessions. Results: The mean CES-D score for entire sample was 18.7 (SD = 10.4) with a range from 3 to 49. There was no difference in scores obtained between measurement time points (F=1.34, NS). Stressful events and low food security were significantly associated. The other factors predicted to be associated with depressive symptomology such as younger age, fewer years of formal education and number of children did not reach significance. Conclusion: The findings reinforce the importance of screening for depression and intervening to improve maternal mood and functioning.